Today I released the Arduino Ethernet Library version 2.0.0, for all Arduino boards (not just Teensy). 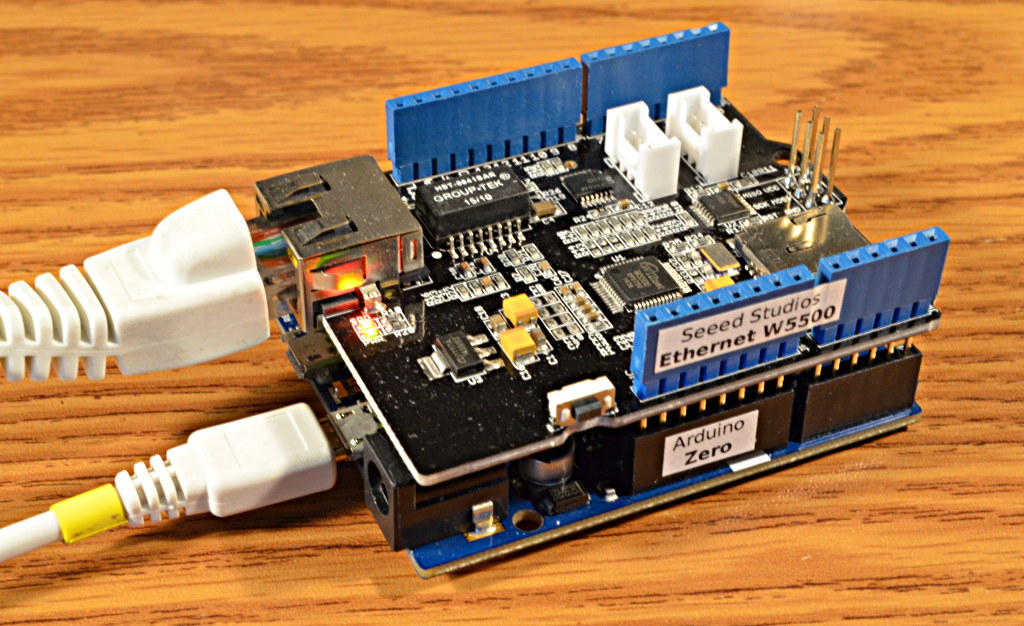 All 3 SPI-based chips from Wiznet, W5100, W5200, and W5500 are supported.  Ethernet.begin() automatically detects which chip you have connected.

Ethernet.init(cspin), an extension added in Adafruit’s Ethernet2 library, is also supported, so you can use any digital pin for the CS signal.

Version 2.0.0 greatly improves performance.  Optimizations at multiple levels within the library work together to vastly improve performance, especially on the oldest W5100 hardware, and also make the most of the newer W5200 and W5500 chips.

A a tremendous amount of work went into these optimizations.  In this photo you can see the setup for debugging timing issues with WIZ812MJ (W5100) and Teensy 3.2, using a 4 channel oscilloscope to monitor SPI communication and an active network tap to monitor the Ethernet packets. 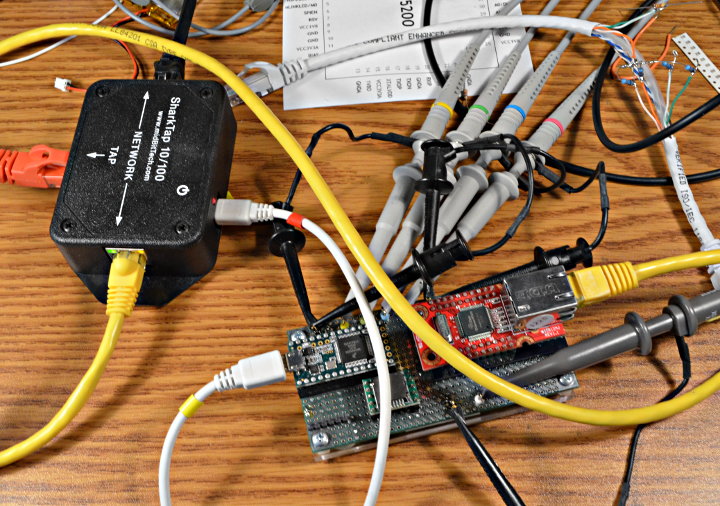 The 2.0.0 performance optimizations are performed on 6 levels.  Here are details, from the highest to the lowest level.

The Wiznet chips transmit and receive Ethernet packets with their internal buffer memory.  Each socket’s buffers are managed using several 16 bit pointer registers within the chip.  Previously these registers would be read and sometimes updated for every access, using many bytes of SPI communication, even just to check whether data is available.

A small amount of memory on the Arduino side is used to cache these registers, which greatly reduces non-data SPI communication.

By default the Wiznet chips have a feature to delay sending TCP ACK packets.  For simple programs which read 1 byte at a time, this makes good sense, since you wouldn’t want to transmit a flood of ACK packets for every single received byte.

The socket register caching also allows the number of Sock_RECV commands written to the chip to be greatly reduced, even for simple Arduino sketches which read 1 byte at a time.  This allows Ethernet 2.0.0 to control the timing of ACK packets, immediately when the Sock_RECV command is used to update the chip’s buffer pointers.

W5100 chips see a tremendous TCP speed boost, because the delayed ACK feature was poorly implemented in that old chip.  Even W5200 & W5500 speed is improved, especially when larger buffers are used.

When your Arduino sketch reads or writes multiple bytes, these efficient block mode commands are used.  Other libraries, like Adafruit & Seeed Studios Ethernet2 have used this block mode for data transfer.

Unlike other libraries for W5200 or W5500, the efficient block most is also used with accessing 16 and 32 bit registers.  In addition to nearly cutting the register access time in half (and register access is done much less often due to caching), block mode also greatly reduces the chances that a register which may change will being read will need to be accessed more than twice to get the same value.

The SPI library has a block transfer function which is optimized to reduce delays between bytes on the SPI bus.  W5200 & W5500 now leverage SPI.transfer(buffer, size) for a significant speed increase when used with boards having a SPI library which optimizes this function.

Control of the CS pin in version 1.1 was done using hard-coded register access to pin 10.  While very efficient, only certain boards were supported and using any other pin required editing the library.

Version 2.0.0 allows any digital pin, but still uses efficient access to GPIO registers on most boards.  All AVR, SAMD, SAM (Arduino Due), PIC32, Teensy and ESP32 boards are supported.  On others, the CS pin control uses ordinary digitalWrite.

EthernetClient has 3 new functions similar to the ones from EthernetUDP.  The remoteIP() function is very nice after connecting, if you used a name and DNS found the IP number.

When things don’t go as expected, the default timeouts can be quite lengthy.  Especially when communicating on with local devices on the same LAN, you might like much shorter timeouts.

The connection timeout is how long to wait when trying to connect to a server, or for stop() to wait for the remote host to disconnect.

EthernetServer now has an accept() function, for use by more advanced projects.  The traditional available() function would only tell you of a new client after it sent data, which makes some protocols like FTP impossible to properly implement.

The intention is programs will use either available() or accept(), but not both.  With available(), the client connection continues to be managed by EthernetServer.  You don’t need to keep a client object, since calling available() will give you whatever client has sent data.  Simple servers can be written with very little code using available().

With accept(), EthernetServer gives you the client only once, regardless of whether it has sent any data.  You must keep track of the connected clients.  This requires more code, but you gain more control.

EthernetServer now also has a boolean test, which tells you whether the server is listening for new clients.  You can use this to detect whether EthernetServer begin() was successful.  It can also tell you when no more sockets are available to listen for more clients, because the maximum number have connected.

Ethernet.hardwareStatus() tells you which Wiznet chip was detected during Ethernet.begin(), if any.  When “nothing works” this can help you discover whether your Ethernet shield hardware is good and you should check for networking issues, or if you need to work on the hardware first.

Ethernet.linkStatus() on W5200 and W5500 tells you whether the link is active.  Sometimes things don’t work only because a cable is unplugged.

All the examples updated have been updated to use these, for better troubleshooting.

Now you can access the network settings after Ethernet.begin().  These are meant to be used in manual configuration mode, not with DHCP.

I attempted to test Ethernet 2.0.0 with as many boards as possible. 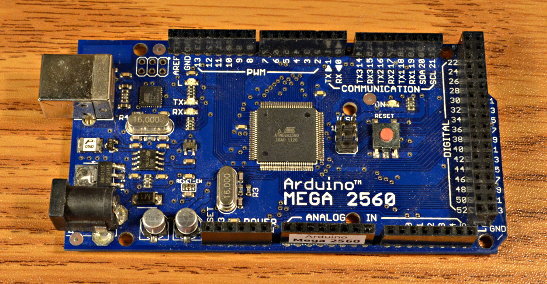 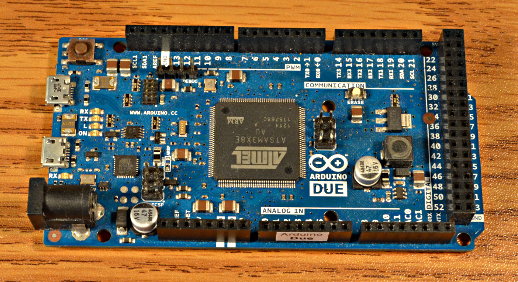 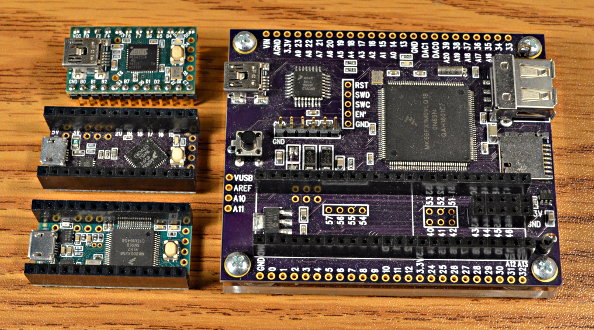 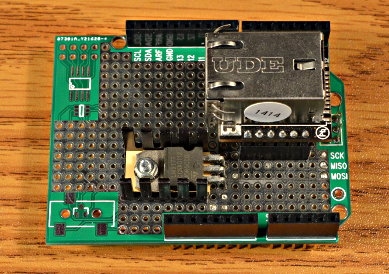 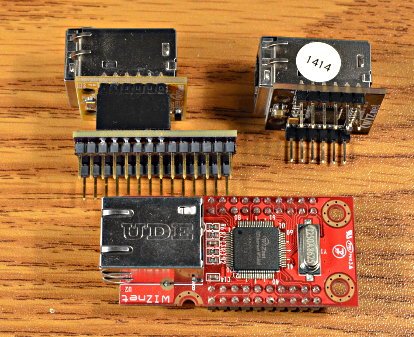 Four tests were run on every board+shield tested.

WebClient (local) is a copy of the WebClient example, modified to access a Linux web server on the same LAN, where packets have only the latency of a layer2 Ethernet switch, less than 0.1 ms.  This test primarily measures the SPI communication speed and CPU overhead.  Well optimized SPI library code greatly impacts this test.  Numbers below are in kbytes/sec.  If you care about LAN-connected speeds, and your hardware is capable of higher SPI clock speeds, editing w5100.h can greatly increase this performance.

WebClient (google) is the WebClient example without any changes.  In this test, packets have approximately 7 ms latency.  This test measures how well the TCP communication works with Internet latency.  Numbers below are in kbytes/sec.  These numbers vary considerably.  The test was run 4 times on each board with the highest speed recorded.  YMMV!  If you care about Internet-connected speeds, editing Ethernet.h for fewer sockets and larger buffers can increase this performance.

UdpNtpClient tests UDP networking.  This example was run and 3 responses from the NTP time server was considered passing the test.

WebServer tests the EthernetServer functionality.  This example was run and a browser on a computer connected to the local network was used to access the analog readings info 3 times.

Not everything I wanted to accomplish made the 2.0.0 release.  These are changes I would like to make “soon”…

DNS on ESP8266 appears to be broken.  Help wanted!  Hopefully someone from the ESP community can look at this.  Or at least point me to a board that uploads faster and has a working Ethernet shield!  (nearly all ESP boards in Arduino form factor lack the 6 pin SPI header)

Non-blocking DHCP & DNS are needed for projects needing to keep rapid polling of other I/O.

In the distant future (and a dream world where I have many more hours in every day), I’d like to do much more with Ethernet.

Small writes could be combined and sent as single packets, if we had a timeout infrastructure or scheduler available.

DNS probably should migrate to Arduino core library, so it can shared among different networking libraries.

DNS cache should be implemented, at least with 1 entry, so we don’t repetitively look up the same host’s IP number.

Wiznet chips have an interrupt pin, which is currently unused.   On high-end boards, we could allocated buffers in RAM and read data earlier, to allow faster TCP speeds over high latency networks.

But here & now, this 2.0.0 brings a much-needed features and a huge improvement in performance to all Arduino users!