In his latest robotics project, Youtube-renown maker and engineer James Burton revisits the question of how to design a robot which can successfully balance on a large ball.

This is Burton’s second version of the project which he started in 2015 with the invention of the robot BB-8. In lieu of brushed motors, this new version uses brushless motors and ODrive controllers granting the robot speed, agility, and accuracy. It also includes an MPU6050 inertial measurement unit module as well as a nRF2401 module for radio control, all driven by a Teensy 4.1.

Not only does the new version of the ball-balancing robot perform its task with great ease, but the robot’s appearance has also seen a striking upgrade. This current version is built to resemble Hal 9000 the sinister computer from 2001 A Space Odyssey featuring a glowing red light positioned in the center (it does not, however, address the user as “Dave”). In the hilarious video above Burton describes the making of the project and also demonstrates the robot balancing on an oversized disco ball. 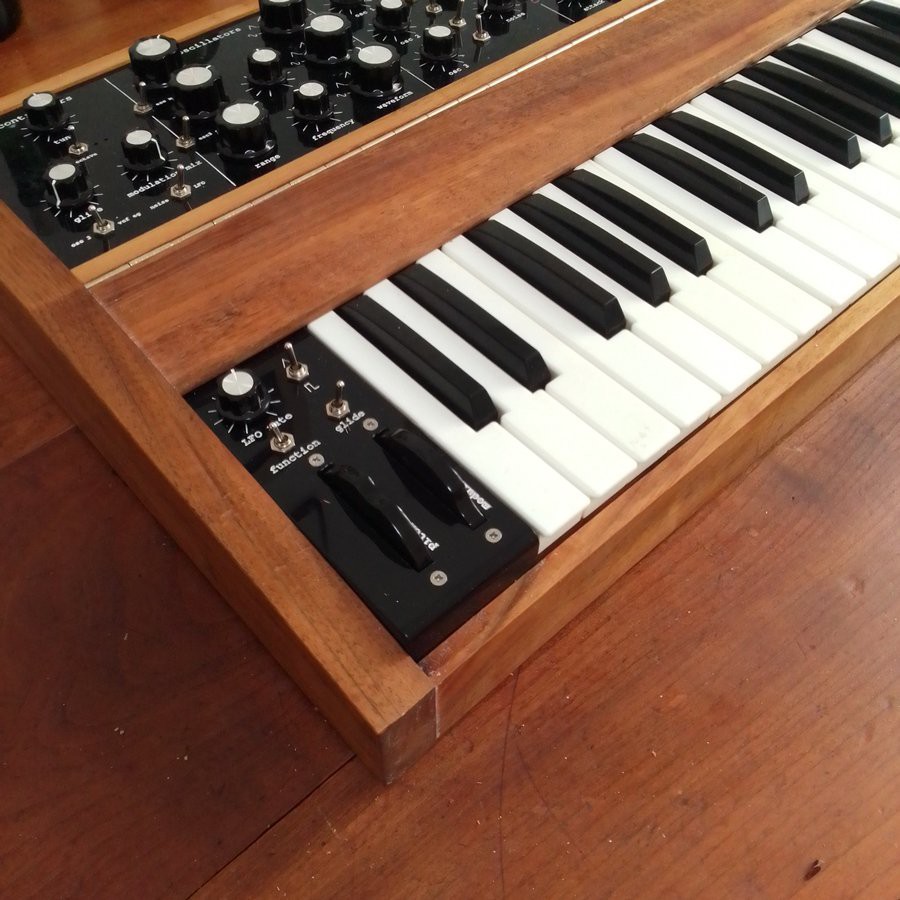 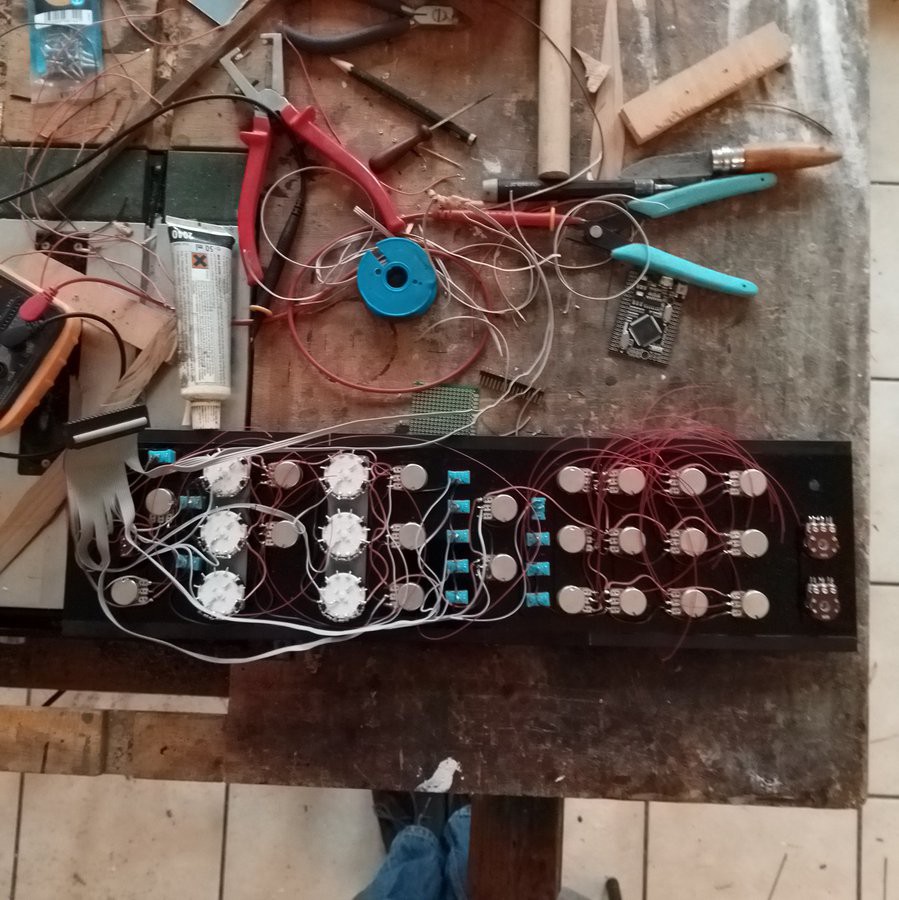 If you’re an intermediate maker hoping to take your hands-on robotics skills to the next level but aren’t exactly sure how to get started, the Bowie Brain Kit might be just the thing. 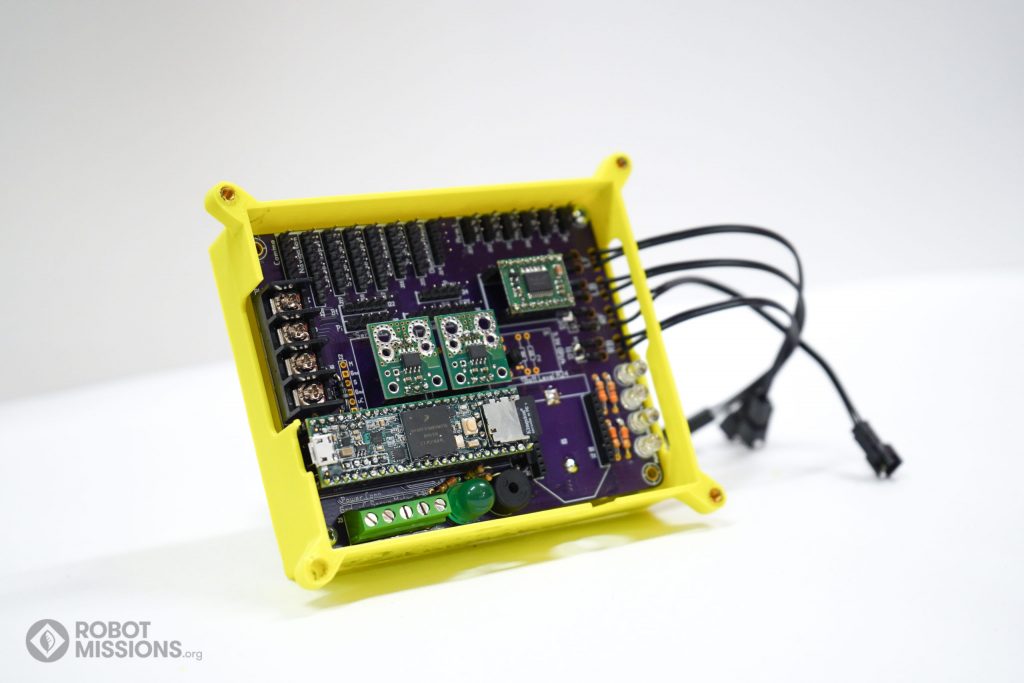 Built by Robot Missions the Bowie Brain Kit comes with everything you’ll need to assemble your own “robot brain” including sensors, motor drivers, coin cell battery, speaker, enclosure and a Teensy 3.6 among other smaller but necessary parts like diodes and resistors. Most importantly, the kit comes with full instructions that will walk you through how to assemble the brain including soldering and attaching components to the board.

In the video below, a couple members of the Robot Missions team perform brain surgery on a weather-sensing environmental robot to show how each of the components work together.

Robot Missions⁠—whose self-declared mission is to build low-cost robotics systems for environmental applications⁠—has, among other interesting projects, deployed rover-style versions of robots that use the Bowie brain to clean up public beaches by sifting sand for trash. 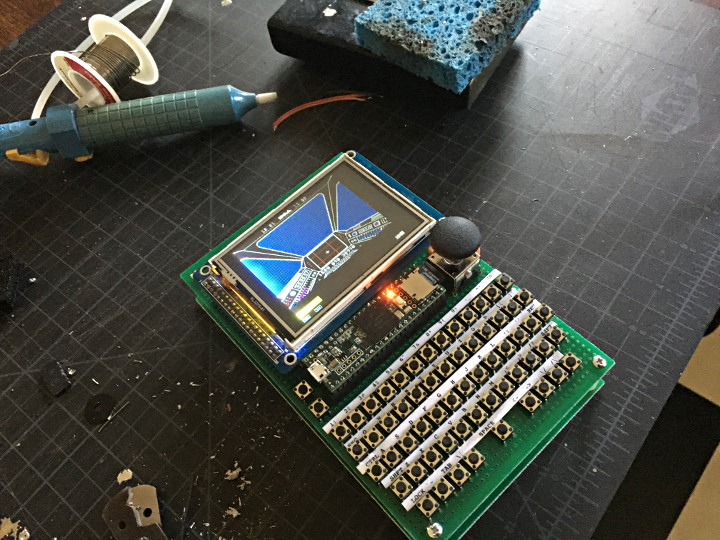 If you’ve ever struggled to learn how to play guitar and thought to yourself, “there must be another way” then you’ll be delighted by this guitar synthesiser project that creator Mike Utz recently shared to the Teensy forum. 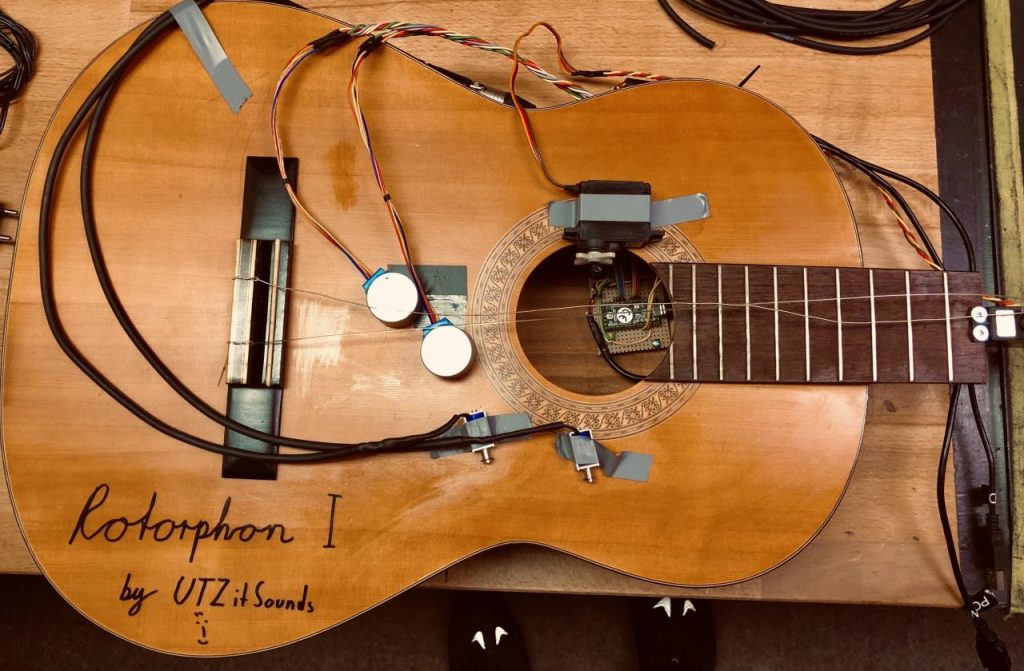 Mike Utz, a Swiss sound engineer, has created this clever and unusual synthesizer that at heart is a guitar that actually plays itself. The synth uses a number of mechanical actuators attached to the body of a guitar driven by a Teensy 3.2. By combining analog and digital processes, Utz creates an interesting combination of sounds by way of producing vibrations against the guitar’s body.

Utz’s project, which he’s dubbed the “Rotorphon,” includes DC moving coils, servos, DC motors, and stepper motors that can be controlled using MIDI via USB. Below you can see the Rotorphon in action playing the theme to Knight Rider (a true test of musical excellence) or head over to Youtube to see it perform the theme from Super Mario or Kraftwerk’s Die Roboter. You can see more of Utz’s sound and engineering-focused projects on his website.

Developer Tom Lafleur has created this development board for testing a new HF radio modem called ARDOP (short for Amateur Radio Digital Open Protocol) for use on the Winlink network. 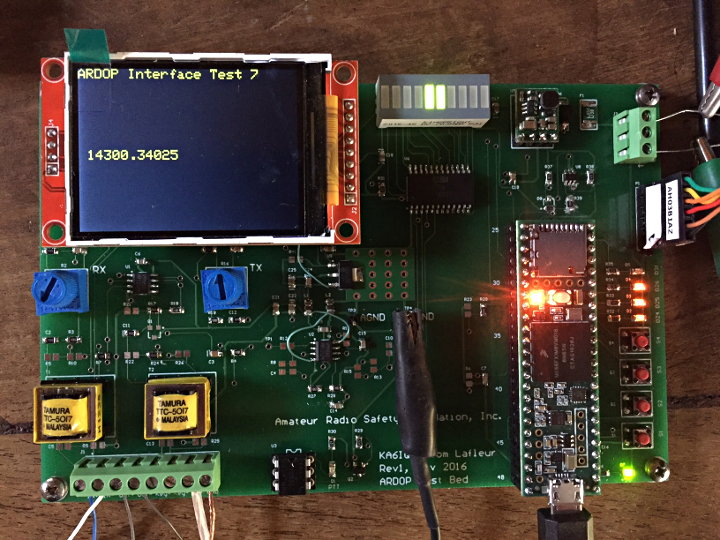 Winlink is a global radio email service that uses radio pathways to communicate in spaces where the internet isn’t available. Winlink is used by Amateur radio operators worldwide, as well as the Red Cross, TSA and many government agencies who use it as an alternative method of relaying information in spaces where the internet can’t reach. The service is developed and maintained by volunteers via the Amateur Radio Safety Foundation. 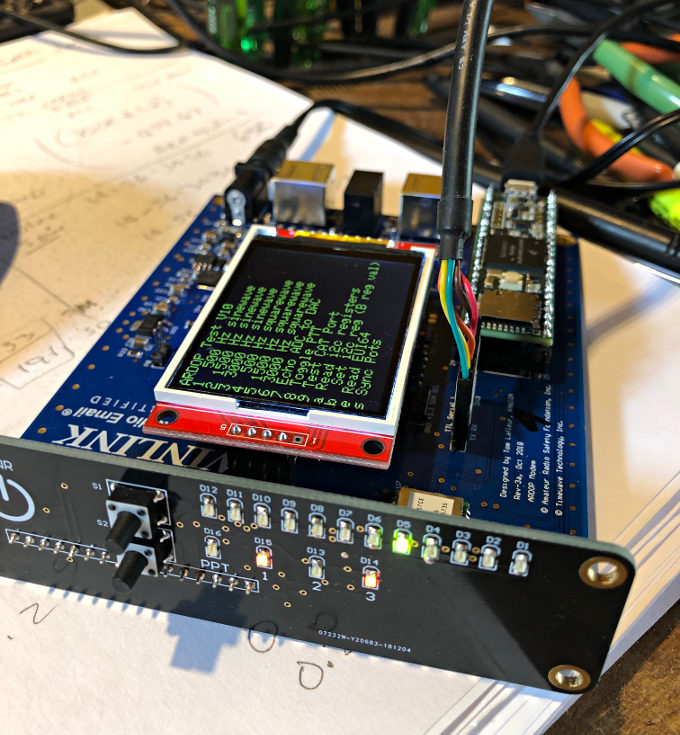 ARDOP, which can be used on a number of operating systems and devices, is compatible with both HF and VHF radio transmissions. The protocol can operate over a wide range of data rates by automatically adjusting for optimized performance under poor multi-path conditions. 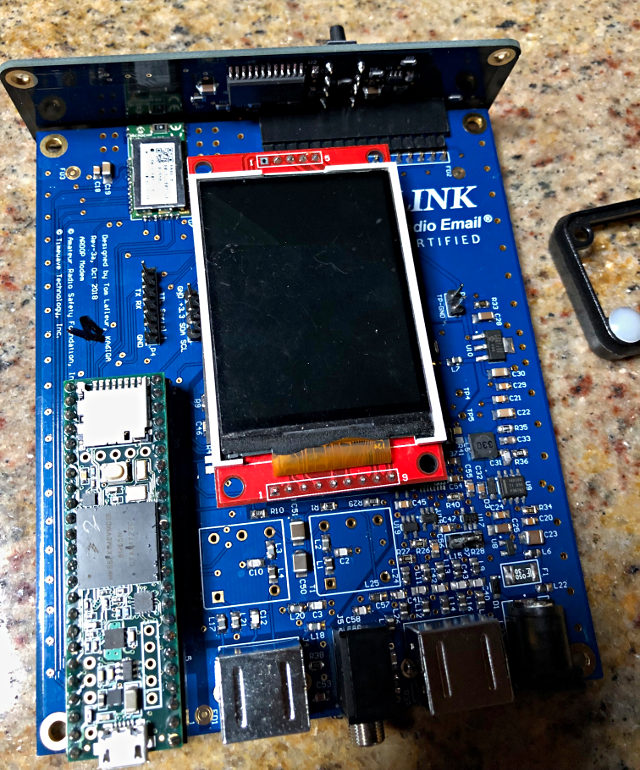 Lafleur’s development board makes use of the full processing power of a Teensy 3.6 as well as the 16 bit ATD and 12 bit DAC. The board features aux, radio frequency control, and can interface with a PC or tablet via serial or Bluetooth 4.2. 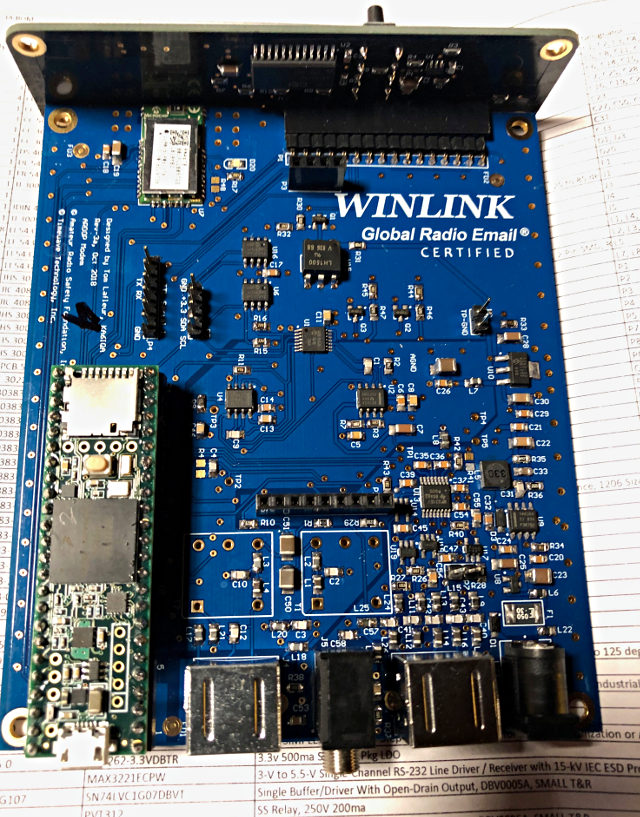