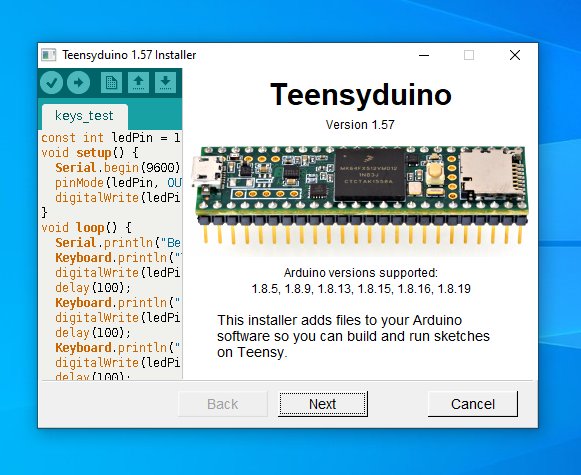 Here is detailed look at the new & improved features in version 1.57.

USBHost_t36 now supports use of USB disk drives connected to the USB host port on Teensy 3.6, 4.0, 4.1, thanks to a major contribution from Warren Watson, also with work from KurtE and mjs513. 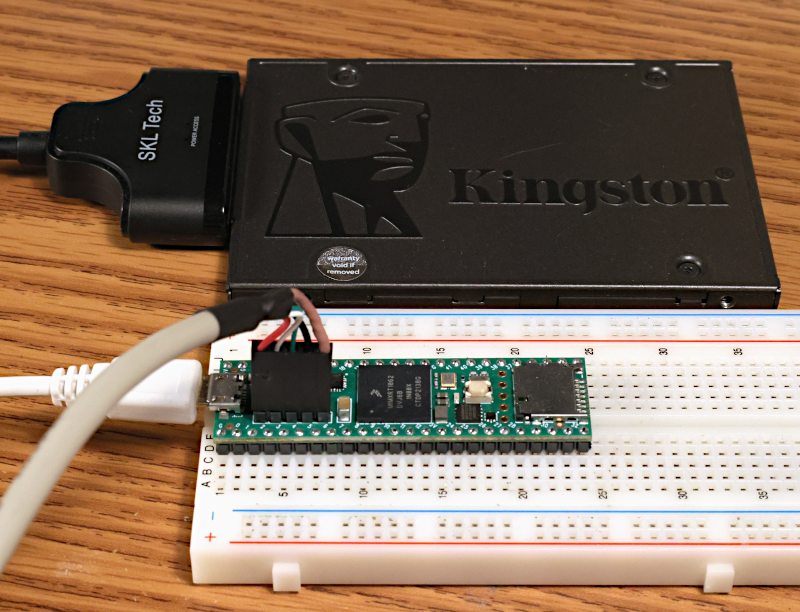 To use USB disks, you create instances of the USBDrive and USBFilesystem classes.  USBDrive provides the driver which actually communicates with your disk over USB.  It also parses the drive’s partition table and allocates each supported filesystem with a USBFilesystem instance. 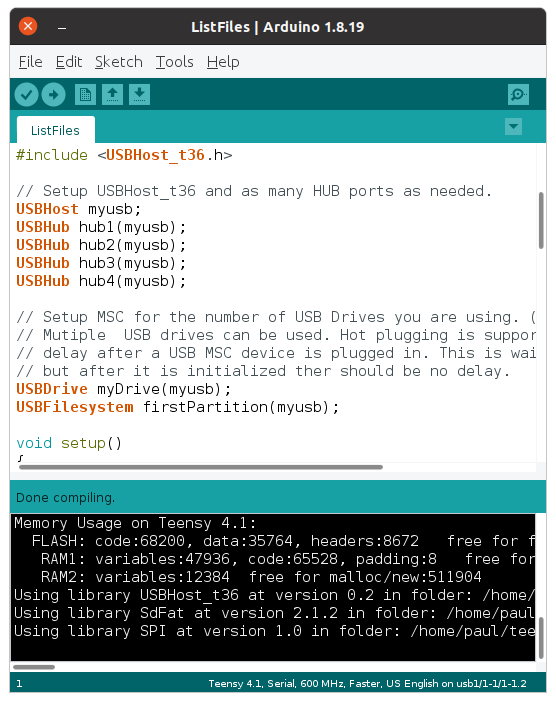 Each USBFilesystem is used the same way as the SD library.  You can call open() to access files, remove() to delete files, and so on.  The open() function returns a File instance, so it can be used with all libraries using File originally developed for the Arduino SD library.

With Teensyduino 1.57, USBFilesystem uses the SdFat library to access the actual filesystem, so only FAT filesystems are currently supported.  Filesystem size is limited to 2TB due to SdFat, though KurtE has added support for GUID partition tables needed to recognize larger drives, so FAT filesystem within the first 2TB of a larger drive can be used.  Support for larger disks may come in future versions.

Warren has also worked on a library to support Linux EXT filesystems.  Hopefully we will find a way to integrate this in future Teensyduino releases.

With all Teensy models, and as a general rule for microcontrollers, audio input using a built in ADC suffers from noise coupling from the digital circuitry on the same chip.  A strong (low impedance) signal is needed to drive the analog pin.  Signal quality is never as good as using a dedicated external audio ADC chip, but it can be acceptable for applications like sound reactive lighting.

PWM output (AudioOutputPWM) is also now supported on Teensy 4, thanks to a contribution from Mark Tillotson, which fixes early code written by Frank B.  Normally MSQ output, which is PWM with special noise shaping, gives better performance.  But MQS is limited to only pins 10 and 12, which conflicts with the main SPI port.  PWM can use any of the PWM pins which are controlled by FlexPWM timers.

AudioConnection between audio library components can now be created dynamically, thanks to a contribution by Jonathan Oakley.  While creating a static set of connections using the design tool is still the most common usage, you can now create connections with C++ new and destroy them with C++ delete, altering the audio processing system while it is running.

Media Transfer Protocol is the standard method Android phones use to share files over USB with your PC.  Work is progressing to fully support MTP on Teensy.  Fredrik Hubinette, KurtE, mjs513, WMXZ, Defragster, MichaelMC, and Yoong Hor Meng have contributed to bringing MTP to Teensy! 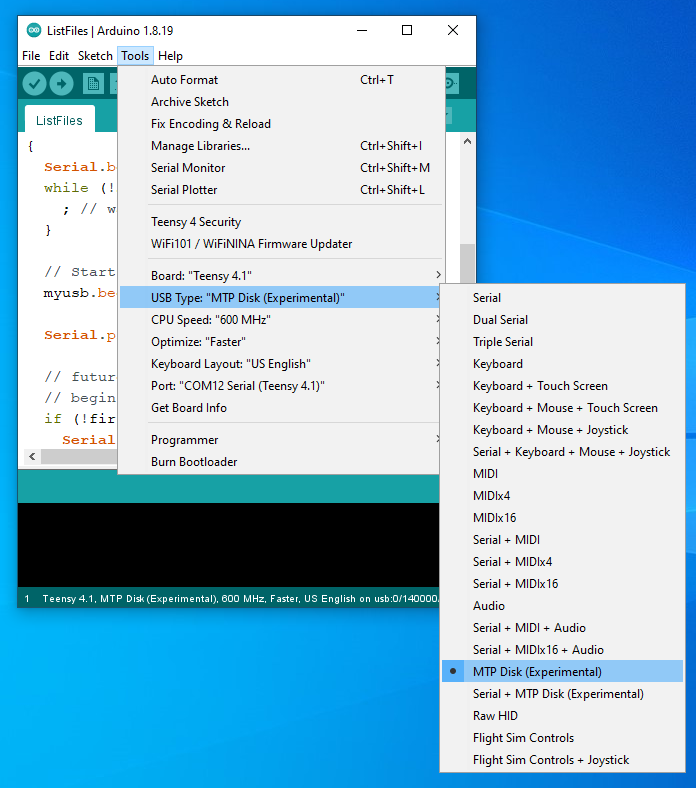 To use MTP you will also need this MTP_Teensy library.

Many of the MTP_Teensy library examples are quite complex, as they’re intended for testing code still in development.  To get started with simple examples, click File > Examples > MTP_Teensy > Simplified Examples.  The 3rd example shows how to share a SD card using MTP. 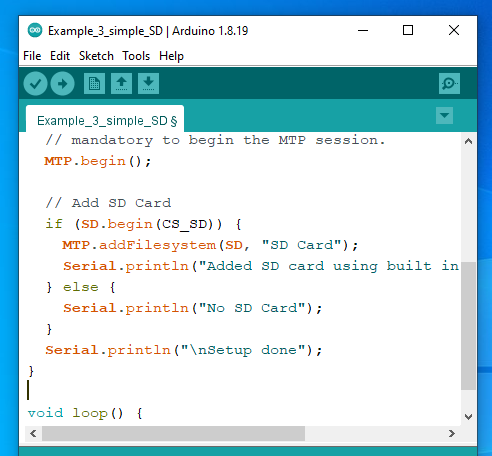 The primary function used is MTP.addFilesystem(), which causes MTP to access the filesystem and make it available to your PC.  You should see “Teensy” appear on the Windows Explorer under “This PC”, offering you access to any drives you used with MTP.addFilesystem(). 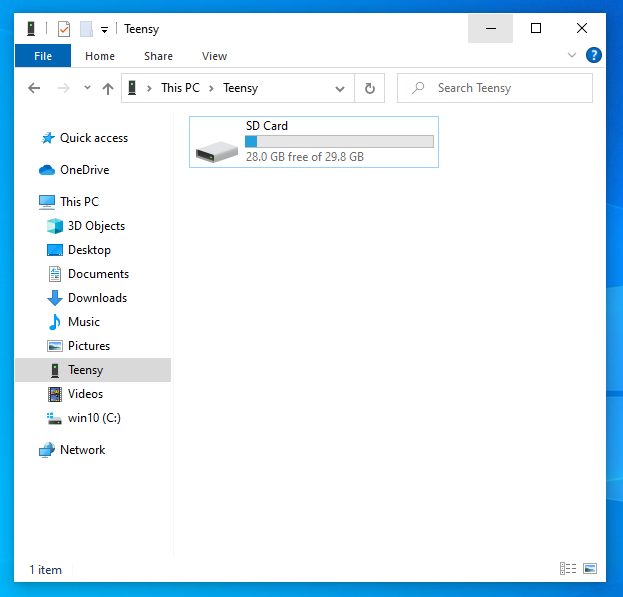 You can call MTP.addFilesystem() multiple times to share SD cards, LittleFS filesystems on flash memory chips, and USBFilesystem instances for USB connected storage.  Each filesystem appears in Windows (or Linux, or Macintosh using Android File Transfer) with the name you gave to MTP.addFilesystem().

Of course, clicking on each filesystem in Windows lets you access all its folders and files. 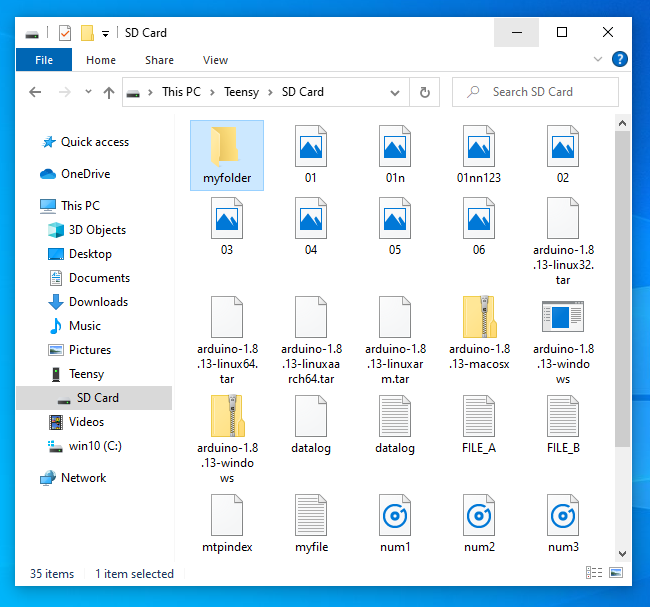 MTP accesses your filesystems using their native filesystem libraries, rather than directly accessing the filesystem as raw data blocks as USB Mass Storage protocol would.  While USB MSC is easier to implement, and is commonly used with other microcontrollers, MSC can not safely allow both the host PC and device to simultaneously access the same filesystem.  MTP can, which is the reason modern Android Phones use MTP rather than MSC, and why Apple iPhone uses a proprietary protocol similar to MTP.

Much work remains to achieve usable simultaneous access to files by both MTP and Teensy.  Today Teensy’s MTP implementation supports only a small subset of notifications messages to tell your PC when code running on Teensy has made changes.  Properly supporting removable media like SD cards and USB drives is also currently limited, needing better support for media change by the underlying SdFat and USBHost_t36 libraries and Teensy’s FS filesystem class.  So we’re still calling MTP “experimental”, even though is it working quite well for basic usage.

Teensyduino 1.57 includes support for Arduino’s next IDE, which is currently at version 2.0-rc9.  To use it, download from Arduino’s software page.  Scroll down to “Future Version of the Arduino IDE”.

Starting with Arduino 2.0, Teensyduino no longer requires a special installer.  To add Teensy support, click File > Preferences and add this URL in “Additional board manager URLs” (this URL will change as IDE 2.0 support matures).

Then in the left side bar, click the 2nd icon for the boards manager and search for “Teensy”.  Click the “Install” button to add Teensy support. 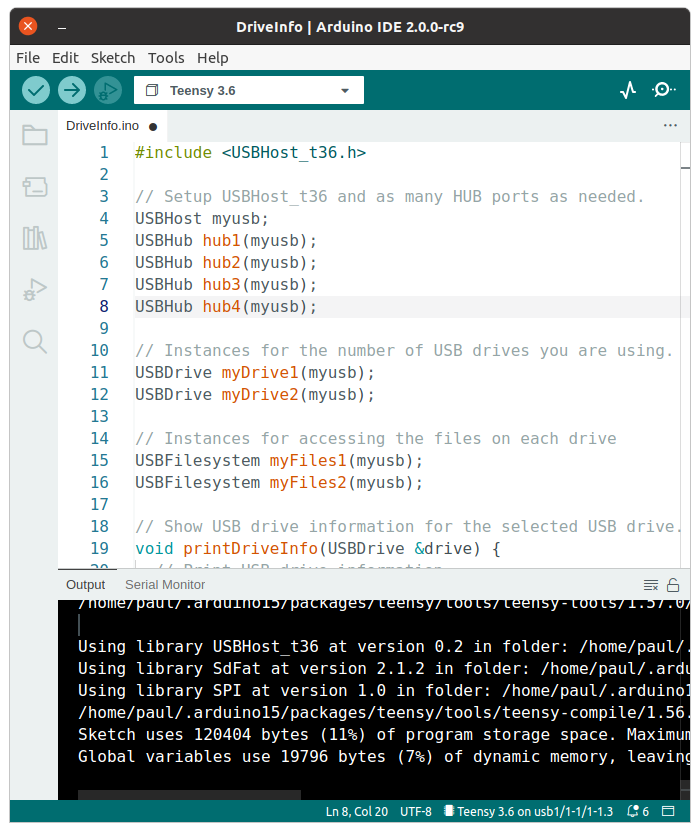 Arduino IDE 2.0 is still in development.  Since 2.0-rc7 it has become quite usable with Teensy, and rc9 continues to improve, but some issues remain.  The Servo library can not be used due to this library search location issue.  It still has no way add special tools, so there is no Teensy 4 Security menu needed for Lockable Teensy.  The Serial Monitor can not be displayed as its own window, and sending text requires an awkward ctrl+enter keystroke.  On some computers, IDE 2.0 can get stuck slowly indexing files or performing other background work very slowly.

Despite some rough edges, Arduino IDE 2.0-rc9 adds many nice features.  It does work well with Teensyduino 1.57, if you want to give it a try.

CrashReport is a feature added by Teensyduino 1.54 to help diagnose software crashes on Teensy 4.x.  The default fault handler logging information about the fault condition to a small reserved area in RAM, then reboots after 8 seconds.

When Teensy 4 starts up, setup() or other functions can test whether CrashReport info is available and print it to the serial monitor, or to a file on storage media (including LittleFS filesystem in a portion of the program flash memory), or send to a network connection, or any other place which implements the Arduino Print class.

Learning the memory location, or “where” your code crashed, is usually not enough to understand “why” it happened.  Typically you need to know what was happening just before the crash. 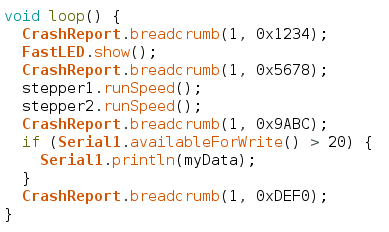 If this program crashes, the number CrashReport prints for Breadcrumb #1 can help establish which part of your program was running.  More complex usage might other Breadcrumb numbers throughout interrupt functions or certain libraries.
A Breadcrumb example program was contributed by Defragster which demonstrates Breadcrum usage in a complete example you can run to see the results.

The Wire library finally supports I2C slave mode on Teensy 4.  Previously slave mode could only be used by Richard Gemmell’s library.  Now examples and tutorials which use the Arduino Wire library in slave mode (listening for other I2C to communicate with its address) will just work.

Since Teensyduino 1.42, Teensy running as a USB serial device appears twice in Arduino’s Tools > Ports menu. When “Teensy ports” is selected, a utility program is run which handles communication with Teensy, and the serial monitor is replaced by highly optimized code.  When “Serial ports” is selected, the JSSC java serial library communicates with Teensy and Arduino’s original serial monitor is used, which can be overwhelmed by the high speed of Teensy 4 sustained printing.

The utility program uses MacOS native functions to efficiently communicate with Teensy.  Unfortunately, recent versions of MacOS Monterey (and perhaps other recent versions) have a terrible bug which can completely crash MacOS in certain rare conditions.

The serial monitor utility program for MacOS has been rewritten from the ground up for Teensyduino 1.57.  The new version completely avoids the MacOS API functions associated with the crash.

This bug has been reported to Apple.

SdFat was updated to fix a bug with writing large files to FAT64 (exfat) formatted cards.

Audio output for PT8211_2 on pins 2,3,4 (2nd digital audio port) has been fixed.  This was a particularly insidious bug, where PT8211_2 would sometimes works, sometimes fail, depending on which other seemingly unrelated libraries were used.

Ethernet library now supports use of other SPI ports ports, thanks to Kurt E.

SD library SdFat_Usage example was updated with examples to use other SPI ports.

EEPROM get() and put() work with String thanks to Luni64.

The Tlc5940 library, for controlling LEDs, was ported to Teensy 4.

Digital signatures were added to utility programs on Windows, to hopefully reduce problems with false positive detection by anti-virus programs.