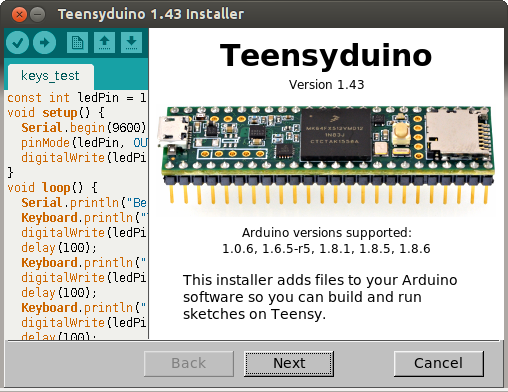 The 1.43 installers are available now at the downloads page.

The main new feature in 1.43 is support for Arduino 1.8.6.  The main reason to upgrade is 1.8.6 can compile your code significantly faster.

Arduino 1.8.6 is the first non-beta Arduino IDE to support parallel compile.  If your computer has a quad-core processor, when rebuilding all files, Arduino may compile up to 4 pieces of code at the same time.  Usually the speed increase is much less than 4 times faster, but still it manages to compile code in much less time than running every compiler process 1 at a time.

When you change boards or settings, a full rebuild of all libraries files must be done for all library files your code uses.  Arduino 1.8.2 to 1.8.5 would often do this full rebuild unnecessarily, especially if you edited any of the library files (not in the Arduino IDE’s editor).  1.8.6 fixes this unnecessary rebuilding.

However, not everything is perfect with 1.8.6.  Several bugs were discovered after release which cause 1.8.6 to crash, especially if certain data files are corrupted.  Teensyduino 1.43 includes fixes for a couple of these bugs.  The rest will be fixed in Arduino 1.8.7, which may appear soon.  When it does, of course we’ll release Teensyduino 1.44 to support it.

The installer now support a “headless” command line install.  This can be useful if you wish to create scripts to automatically install Teensyduino.  The main intended use is for Continuous Integration testing with systems such as Travis-CI.

Run the installer with –dir=<directory> to specify the Arduino install location.  Using this option cases the installer to run automatically without the GUI.

Adafruit has offered to include Teensy in their automated testing script.  Soon this will allow Teensy to be automatically tested (at least to verify libraries compile without error) for all of Adafruit’s libraries!

Several issues are fixed in version 1.43.