Teensyduino version 1.44 has been released. 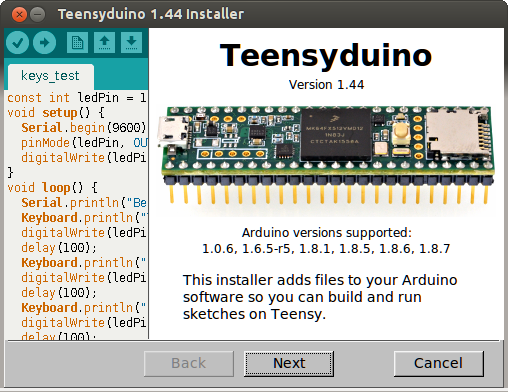 The 1.44 installers are available at the downloads page.

Only a few weeks after 1.8.6, Arduino released 1.8.7.  With a new Arduino comes a new Teensyduino release to support it.

Arduino 1.8.7 fixes several rare but serious bugs, including issues with the IDE being able to start up.  1.8.7 adds no new features, so there’s no need to upgrade from 1.8.6, unless you’ve encountered issues.

The complete code was published on github.  Now with 1.44, this project has been integrated into the Audio library.  It’s now available in the design tool, and the examples can be accessed in Arduino by clicking File > Examples > Audio > Synthesis > Wavetable.

A version of their SoundfontDecoder updated for the Audio library is also available on github. 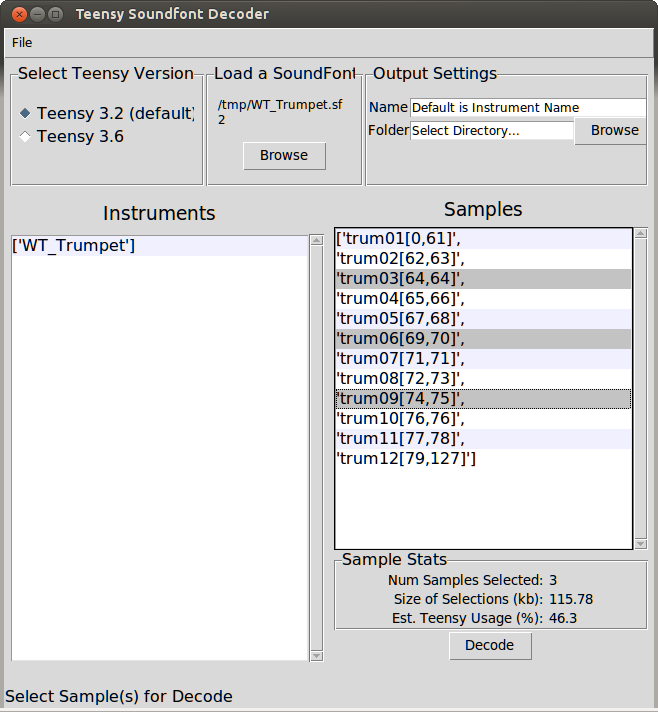 Teensyduino 1.42 greatly improved how Teensy is shown in Arduino’s Tools > Ports menu.  But under some circumstances on Macintosh and Windows, a noticeable lag could occur when clicking the Tools menu.  1.44 eliminates this interactive delay, so the Tools menu responds quickly. 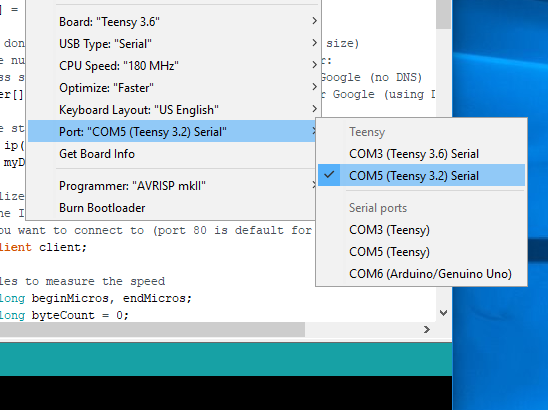 The Teensy specific Ports menu is implemented by a native helper program called “teensy_ports”, which Arduino automatically runs at startup.  Because this is a native program, it can gain detailed info about USB devices which isn’t available to Java code in the Arduino IDE.  In 1.42 & 1.43, when you clicked the Ports menu, a query was sent to this program.  When it responded, the info would be put into the Ports menu.  But if anything caused a delay in the response, you would see that delay in the appearance of the Tools menu.

Version 1.44 changes teensy_ports to always send USB device changes as they occur.  A dedicated Java thread listens for the incoming USB info and keeps a list of devices in the IDE updated.  When you click the Tools menu, rather than requiring communication back-and-forth, the list already in the IDE’s memory is copied for use by the menu.

This improvement was partially motivated by a conversation with the Arduino developers.  They intend to eventually allow boards like Teensy to provide their own port “discovery” tools, using a JSON-based format.  This is one of the major missing features which requires Teensy to have a special installer, rather than using Arduino’s Boards Manager.

Another benefit of switching to the JSON format, which allows communicating all info Arduino uses, is the Tools > Get board Info menu now works with Teensy.

The multithreaded JSON-based Ports menu was developed on 1.8.6 and ported to 1.8.7 and back-ported to 1.8.5, so you get this speedup on any of those versions. 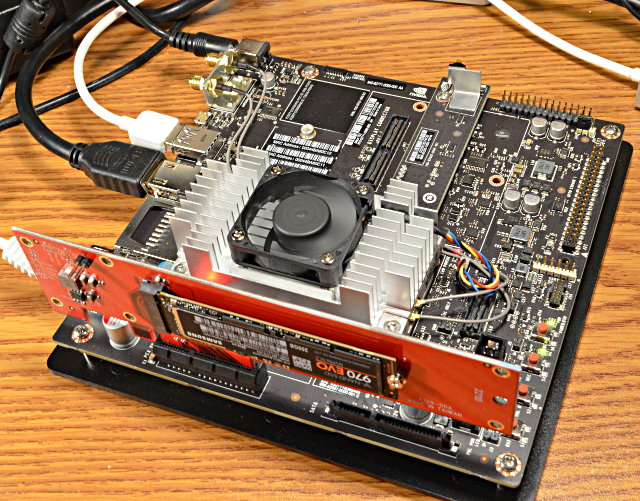 However, Arduino’s downloads page still has ARM64 only on the hourly build and beta build sections.  The Arduino 1.8.7 ARM64 file is actually on their server and can be accessed by copying the link to the ARM32 version, and replace “arm” with “aarch64”.

The final hold-up is due to Oracle’s Java runtime environment (JRE) for 64 bit ARM.  It is “headless”, meaning it only supports command line programs.  Unlike the other Linux copies, there is no “java” folder with the correct Java runtime.  As a result, the IDE will use whatever Java runtime exists on your Linux system, which may or may not be compatible.

Here is a copy of Arduino 1.8.7 with a compatible copy of OpenJDK added in the “java” folder.  Other this this addition, it is identical to the Arduino 1.8.7 file on Arduino’s server.

Just extract this file, then download and run the Teensyduino 1.44 installer.  Like all Linux systems, Teensy’s udev rule file must be installed to access the USB device files.

The default kernel that ships with Jetson lacks the cdc_acm driver needed for USB serial communication.  You can still use Teensy without this this driver, because Teensy Loader uses HID protocol, and the new Ports menu is able to natively detect USB devices even when their drivers don’t load.  But to use the serial monitor with a Teensy programmed to be USB serial, you will need to install the cdc_acm driver.  If following those instructions, you may need to type “./installCDCACM.sh” to run the script, rather than “./installCDCACMModule.sh” as the instructions say.

Obviously AARCH64 support is very new.  If you encounter issues, please report them on the forum.