Ian Cole and a team of makers at MakerFX transformed a wheelchair into an amazing interactive Bumblebee costume. 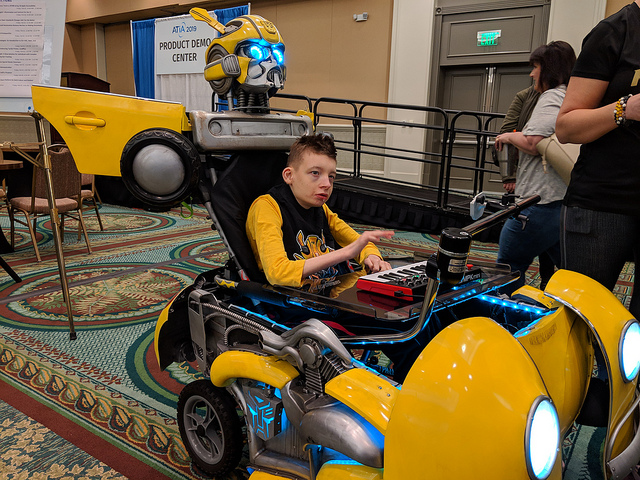 Magic Wheelchair, a nonprofit organization that builds epic costumes for kids in wheelchairs, matched ATMakers to a kiddo for a wheelchair build.  ATMakers joined forces with MakerFX to build a wheelchair costume in 3 short weeks – in time for the Assistive Tech Industry Association conference.

Alex, the young man receiving the wheelchair uses assistive technology devices to communicate, so as part of the build the team decided their Bumblebee needed to be interactive using a keyboard.  The interactions they selected could be usable by Alex and worked into his physical therapy in the future.

The dashboard has a capacitive touch horn, two assistive technology buttons, a 320×240 LCD video screen, and 3 addressable LED rings.  The dashboard sends commands to the costume using USB MIDI notes.  This allows the costume to be controlled by either the dashboard or a keyboard.  All the controls and LEDs are powered by a Teensy 3.6 with a Teensy Audio Shield.  They used the FASTLED Library and the Non-blocking WS2812 LED Library to control the LEDs.  The USB Host capabilities of the Teensy 3.6 were used for the MIDI connection.

Code for the project is available in this MakerFX GitHub repository.