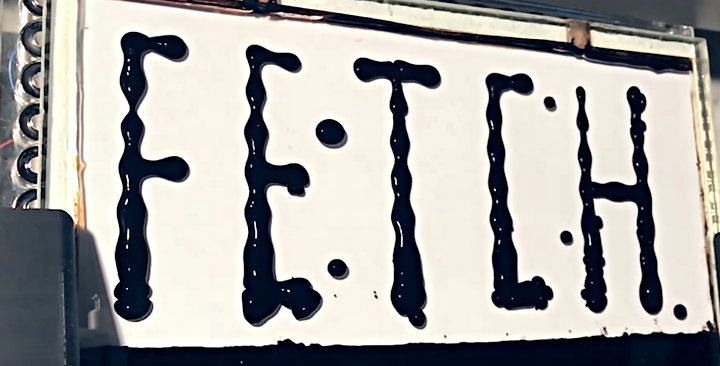 Detailed are published on this Hackster page, and also this Hackday.io writeup.   The complete source code is published on github.

Their impressive software work is built on top of hardware featuring pretty amazing craftsmanship.  A grid 252 electro-magnets provide the force to move and suspend the display’s black fluid. 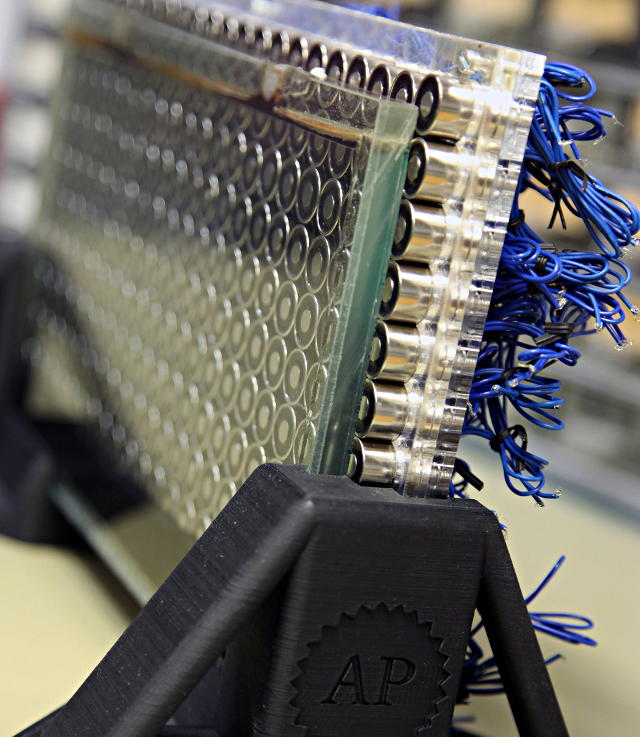 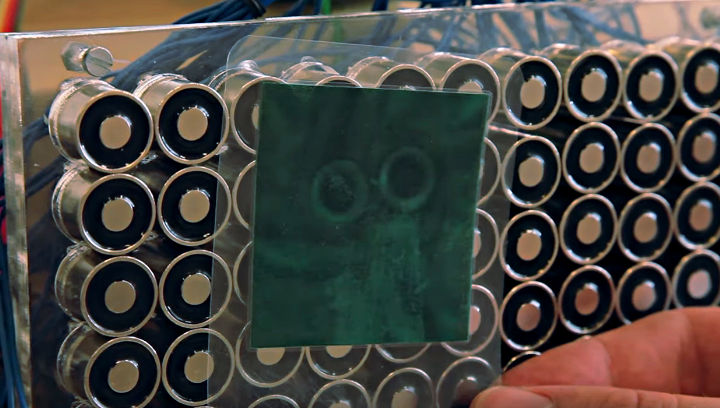 Electromagnets don’t just run themselves.  The team had to create a dozen custom driver circuit boards to control all those individual magnetic fields. 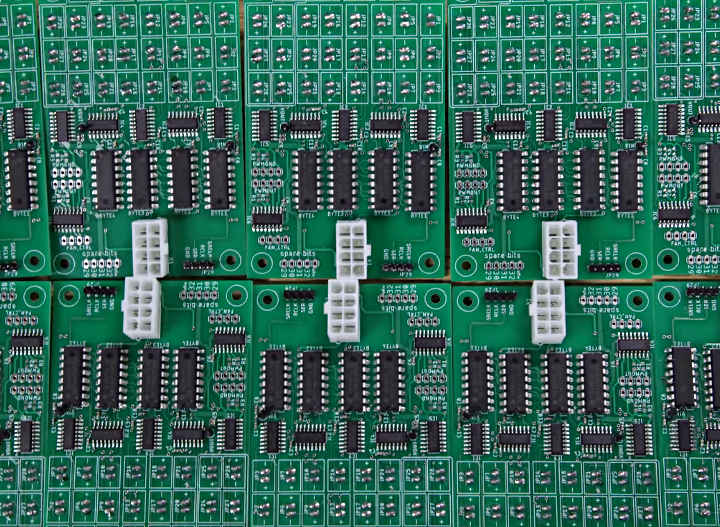 Really impressive work from this team! 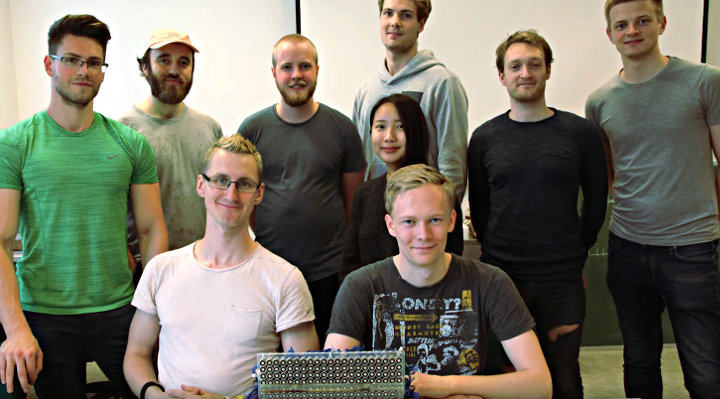 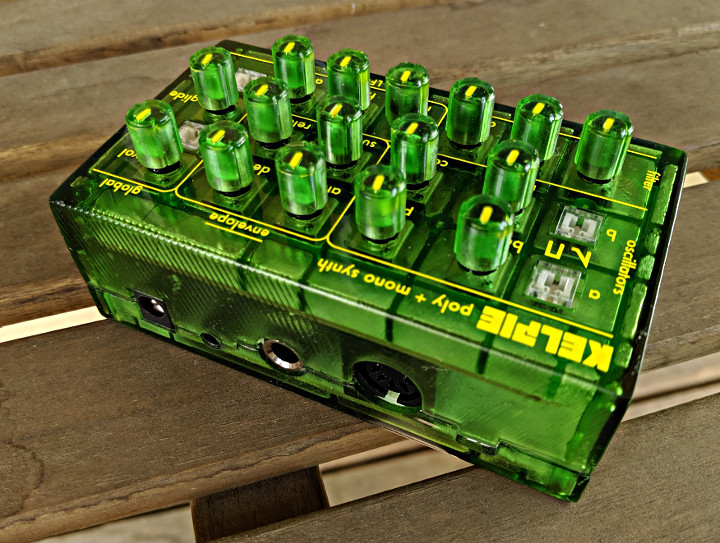 This incredible little synth is a great way for beginners to get started in the world of synthesizers.  It only requires a power supply and a MIDI connection that can plug right into MIDI device such as a keyboard.  It also include a 1/4″ mono output and 1/8″ stereo output.   The workmanship and attention to detail on this project is impressive.

Kenneth rolled his own Teensy 3.2 and Audio Shield to create the KELPIE and used Teensy Audio Library.  It includes USB input so that you can update the code. 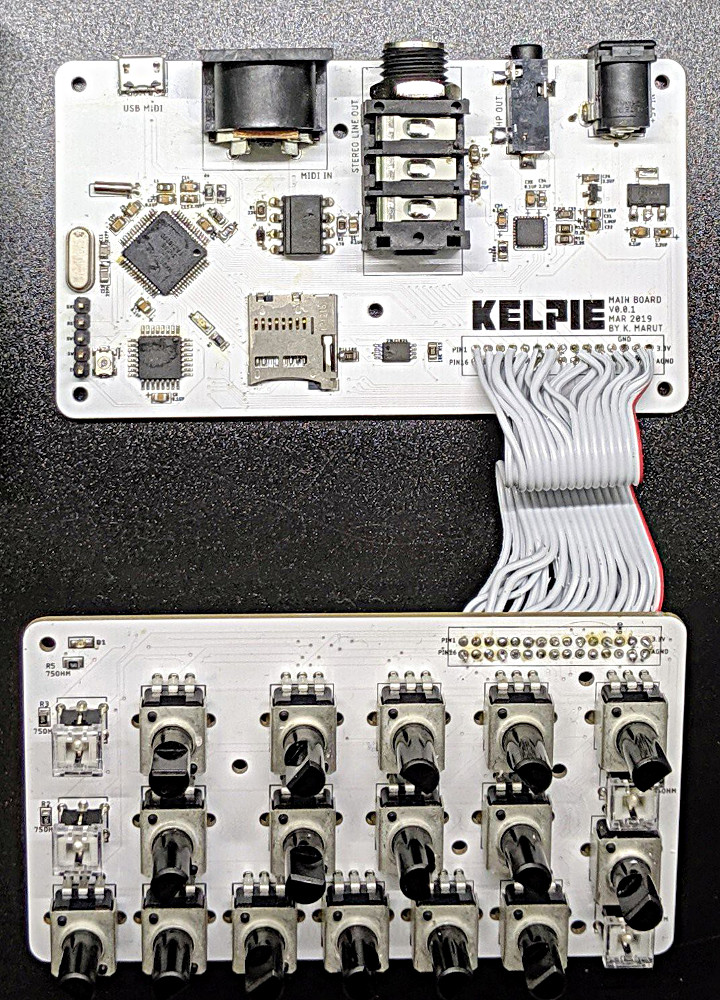 More details on the project can be found on this project page.

This project is open source with hardware files and code available on GitHub.

Pattern Agents have developed TSOC_Teensy3x, a thingSoC adapter that allows you to connect thingSoC, Mikrobus, and Grove System modules using a Teensy 3.2 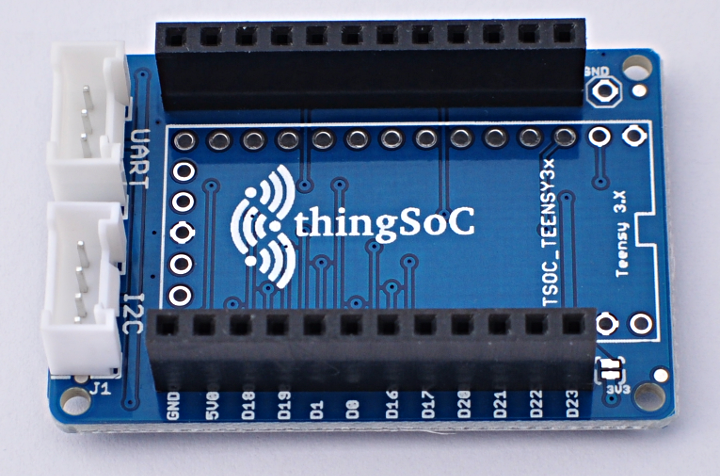 This clever adapter can be used with any thingSoC, Mikrobus, or Grove System modules.  It also works with a number of different IoT comptaible wireless radio modules as well as many different input and output sensors and modules giving you a lot of flexibility with a variety of sensors and actuators. 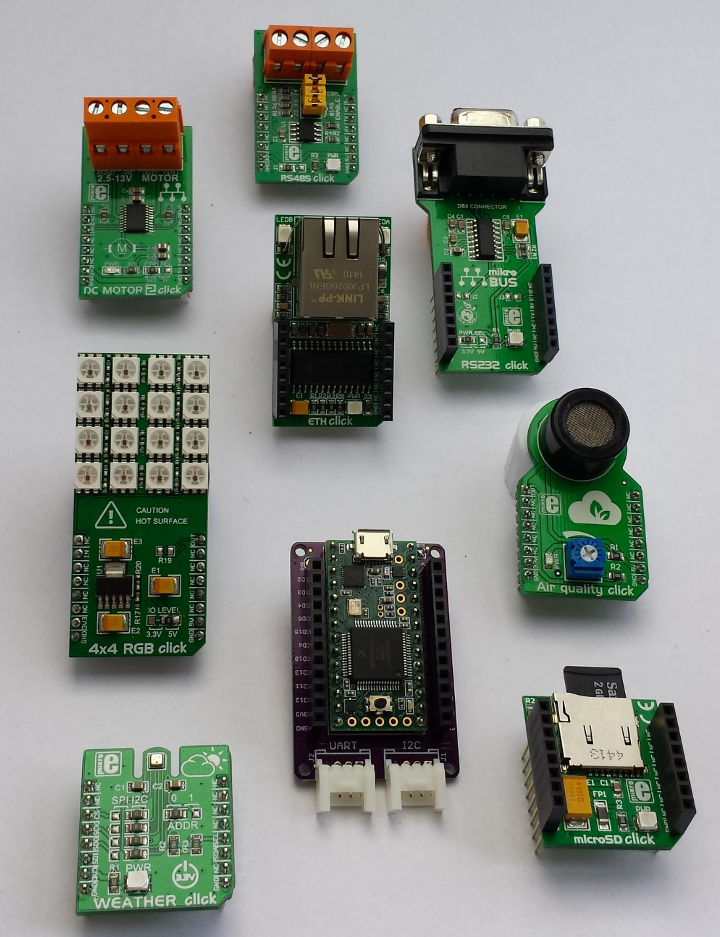 Additional details on the project are available on GitHub.

arkhipenko made an impressive Predator costume, complete with a head-tracking plasma gun. 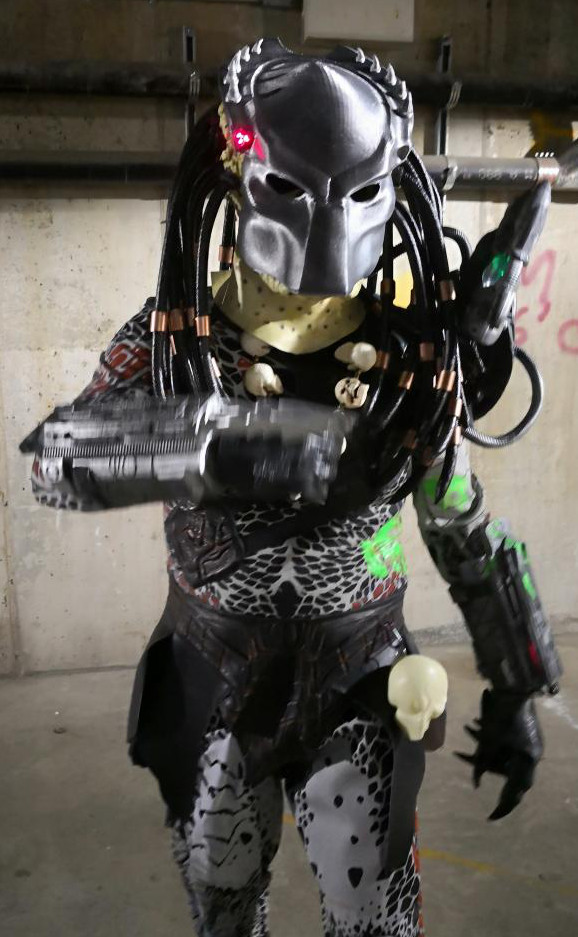 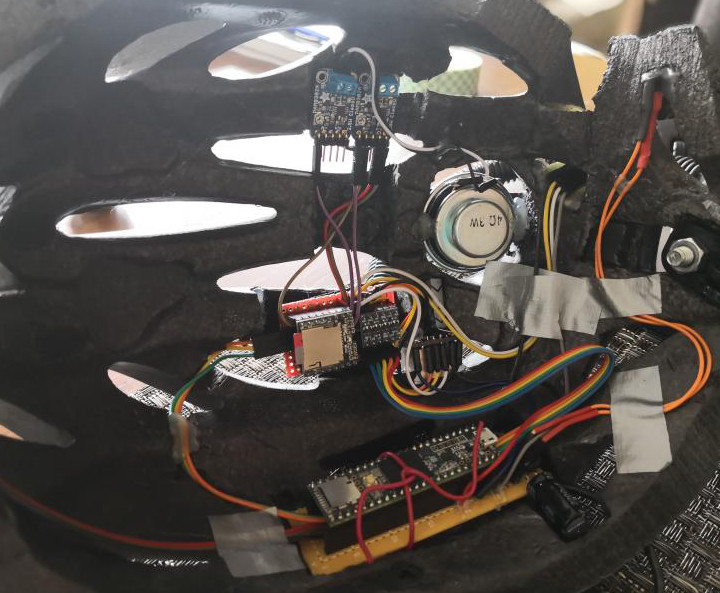 This full-body costume features animatronics, two sound systems, laser lights, and props such as plasma gun!  A Teensy 3.5 was more than up for the task of of being the brains of it all.  The electronics are mounted in the plasma gun backpack that was cleverly made from a bicycle helmet.

As part of the project, arkhipendo modified the Adafruit PWM Servo Driver library as well as the library for the InvenSense MPU-9250 motion tracking device to make them more Teensy friendly.

More details on the build can be found on this Instructables page.

Source code for the project is available on GitHub. 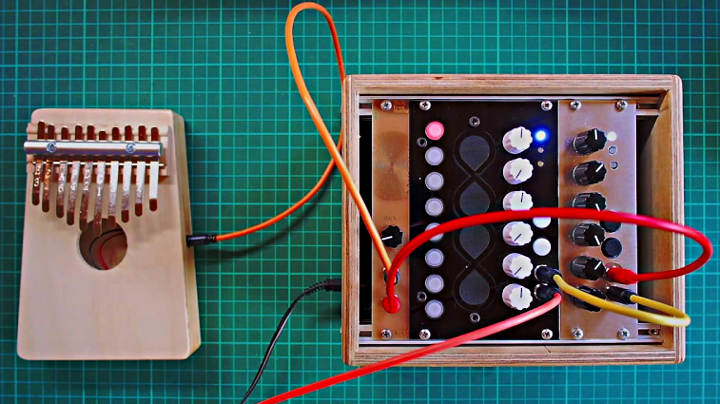 The looper uses the ADC and DAC in the Teensy 3.5 to process the audio.  The audio is recorded to an SD card to get past the RAM constraints.  SD cards are known for being slow, so two circular buffers are used – one to read the audio and the other to write it.

Once a loop is recorded, you can cut it in real time using the 8 buttons.  The buttons communicate with the Teensy via I2C.  A shift register is used to scan the buttons and turn the LEDs on and off.  The looper also features knobs that allow you to change the playback speed.

Details of the build can be found on this Cutlasses blog page.  Code for the project is published on GitHub. 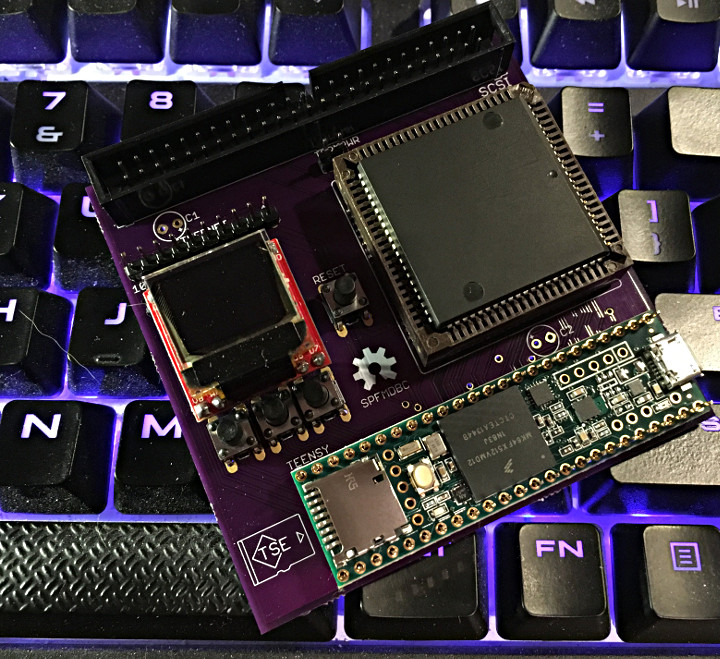 Code and Schematics for the project are available on Bitbucket.

Benjamin Blundell has converted a Nintendo Power Glove run on modern systems as a USB joystick. 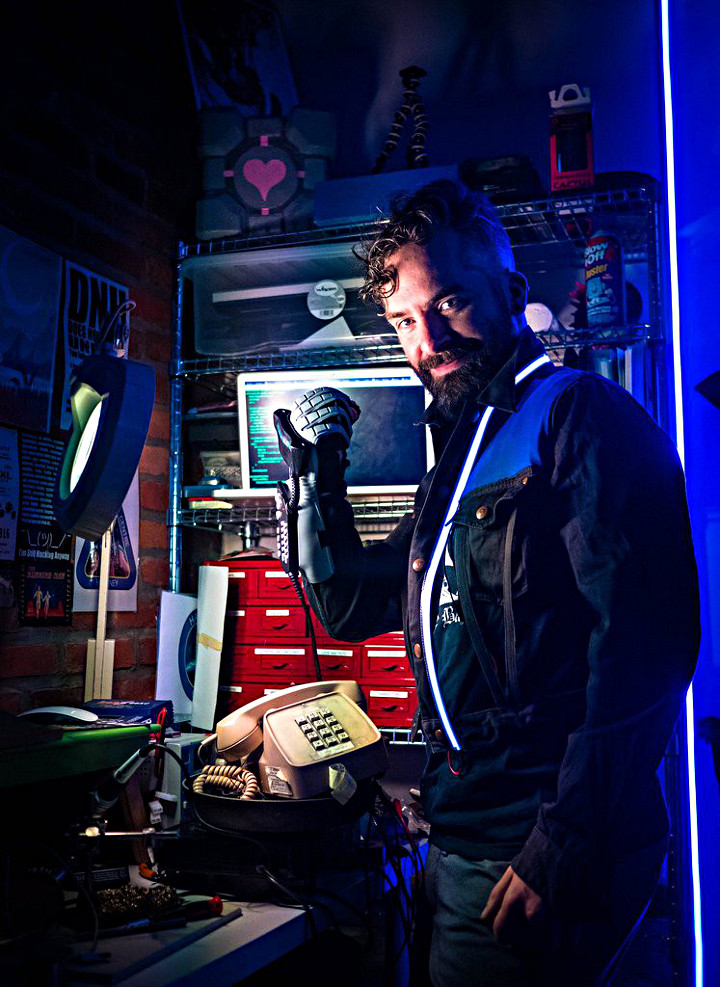 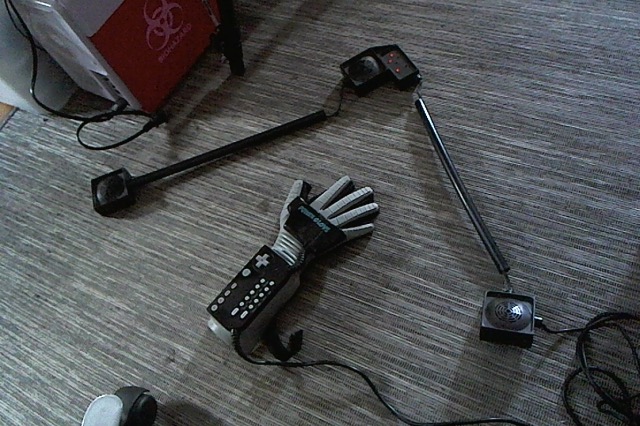 This totally rad project to breathe new life into 80’s technology. Benjamin has some affinity for some of the better parts of the 80’s , like- technology, style, and music.  This nostalgia for 80s tech lead him to take a look at the Nintendo Power Glove to see if he make it usable with modern technology rather than just the NES that it was designed for.

To start out, Ben gabbed a multimeter and mapped out the which of the BD9 connector pins correspond to which NES pins.  Luckily there is a lot of good information available on the NES controller protocol.  He then whipped up a converter board with a that the Power Glove plugs into to allow you to then use the Glove over USB.  The converter board uses the flight joystick capability of the Teensy-LC.  A level shifter was added because the Teensy-LC runs on 3.3v and the Glove on 5V. One of the nice things about this build is that it doesn’t requiring hacking the innards of the Power Glove itself.

Peter Jonas (PumpkinEater on the forum) made an antenna analyzer based on a DDS (Direct Digital Synthesizer) module with a built-in AD9851 chip. 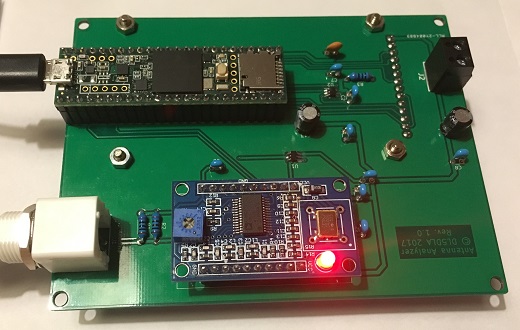 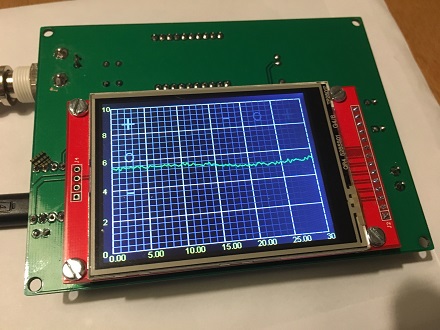 This antenna analyzer can be used to find out at which frequencies a short-wave antenna is matched to the 50 Ohm impedance of the cable and the transceiver. This behavior is presented by the so called “voltage standing wave ratio (VSWR)”. To get this value for a frequency range, a Teensy 3.5 controls a DDS (Direct digital synthesizer) signal generator, which sweeps frequencies between 100kHz and 30 MHz. The hf voltages on the signal generator and at the antenna under test are read by the Teensy and compiled by some calculations to derive the VSWR values. The results are shown on a TFT touch display.